In 1984 the abrasive waterjet was released as a commercially available product. It was powerful, it was incredibly versatile; but it took a special operator to run it.  Someone who was into it – who had caught the waterjet bug. Why? Because at the time, waterjet wasn’t all that easy to run.

I had the unique opportunity to be such a waterjet operator by getting into abrasive waterjet just one year after it was released.  While in undergrad and grad school running the waterjet laboratory and demo center I could reference basic cut speed tables for what was believed (at that time) to be the best operating parameters. The table included water pressure, orifice size, mixing tube size, abrasive size, abrasive flow rate and the maximum cut speed for a dozen common materials at one or two thickness levels. 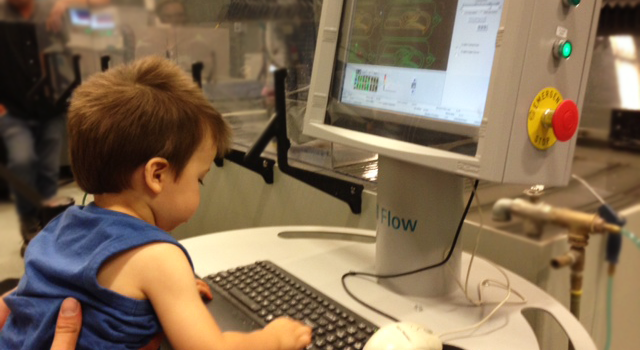 A waterjet is a beam type cutter, somewhat like a plasma, oxy acetylene, CO2 laser, or fiber laser. Programming a waterjet, and operating one for that matter, is actually simple. In fact, a waterjet is usually considered to be easier to program and operate than most other machine tools. I say this because a waterjet typically does not require a change in parameters when going from one material to another.  The tool is non-contact, pierces material easily to start a cut, and cuts without heat so materials don’t change or warp from the cutting process. If you are newer to this blog, a previous article  on what makes up a waterjet might be a good precursor to reading this post.